In this lecture we will learn about the vibration of objects!

Everyone has had the experience of playing on a swing set in the park when they were little.
Think of the swing range of a swing set.

On the other hand, how about the speed of the swing?
Have you ever seen someone rowing fast (or slow) on a swing?

No, you must never have seen it!

No matter who rides the swing, the frequency of the swing does not change.
No matter how accustomed you are to playing on swings, you cannot control how fast they swing.

What is characteristic vibration?

The fact that it cannot be controlled can be interpreted as “the frequency at which the swing vibrates is predetermined.”

In fact, it is known that any object can only vibrate at a specific frequency for each object! (This is called the eigen frequency.)
Shaking with strong force does not change this.

The vibration of an object at its eigen frequency is called “characteristic vibration”.

The tuning fork is a well-known tool that utilizes characteristic vibrations.
A tuning fork will only produce a sound of the same height no matter what force is used to tap it.
This means that the tuning fork is only vibrating at an eigen frequency!

Resonance is a phenomenon in which a stationary object begins to vibrate when a force matching the eigen frequency of the object is continuously applied to it.

If the rhythm matches the eigen frequency, even a weak force can eventually produce a large vibration.

A famous example is the phenomenon that when two identical tuning forks are prepared and one is struck to sound, the other also starts to sound.

The tuning fork vibrates the air around it, and the vibrations are transmitted to the other tuning fork, meaning that even the weak force of air vibration can shake the tuning fork to an audible level. 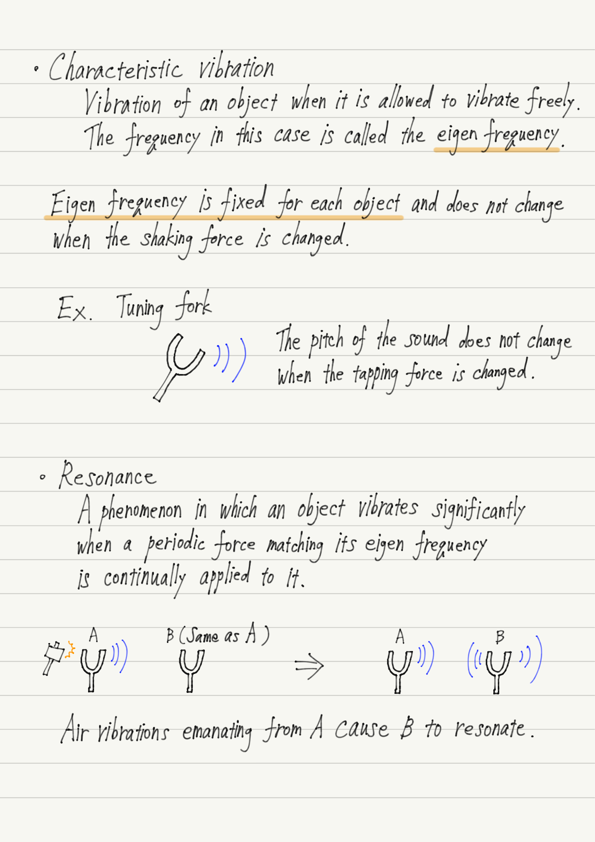 Let’s take a stringed instrument as an example to calculate its characteristic vibrations!