From this lecture, you will learn about the field of thermodynamics.

First, I will explain the terms temperature and heat, which appear frequently in this field, but since these two terms are somewhat confusing, let’s make sure we understand the meaning of each.

Temperature is the numerical expression of the degree of hot or cold felt when touching an object.
I think you know that without being explained.
Let’s take it one step further. What exactly are “hot” and “cold” that we feel?

To answer this question, we must enter the microscopic world.
In fact, the true nature of temperature is the motion of atoms and molecules!

The atoms and molecules that make up matter are constantly moving.
Molecules in gases are flying around, while those in liquids move around freely to some extent, though not as freely as gases.

Solid atoms are fixed in position and appear to be immobile, but in fact they are known to vibrate in situ.
This movement of atoms and molecules is called thermal motion, and the quantity that expresses the intensity of thermal motion is temperature.

Isn’t it strange that we can feel the movement of invisible atoms and molecules as hot or cold?

Suddenly, imagine that you have put ice in water.
What happens to the water and the ice?

Needless to ask, it is obvious that “the ice melts and the water gets colder”.
Let us consider what is happening in this phenomenon.

Thus, given a hot object and a cold object, kinetic energy is transferred from the hot object to the cold object.
The energy transferred in this case is called heat.
The unit of heat quantity is J, the same as energy. 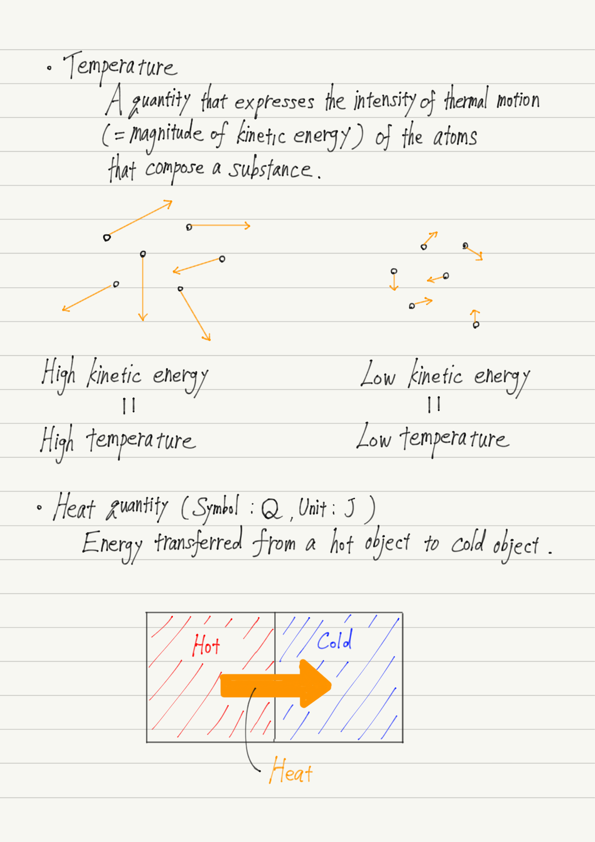