Starting with this lecture, we’ll be learning about energy!

Before we talk about energy, let us first learn about the work done by forces.
Work appears in all areas of physics, not just mechanics.
If you’re fuzzy on the meaning of a term, it can hinder you in other areas, so make sure you know exactly what it means here!

What is “work” in physics?

The amount of work can be calculated as “magnitude of force × distance traveled”, using the unit J (joule).

Since this is not enough explanation, I will explain some common calculation patterns using examples.

1) When force and direction of movement are the same

Start with the basic pattern. 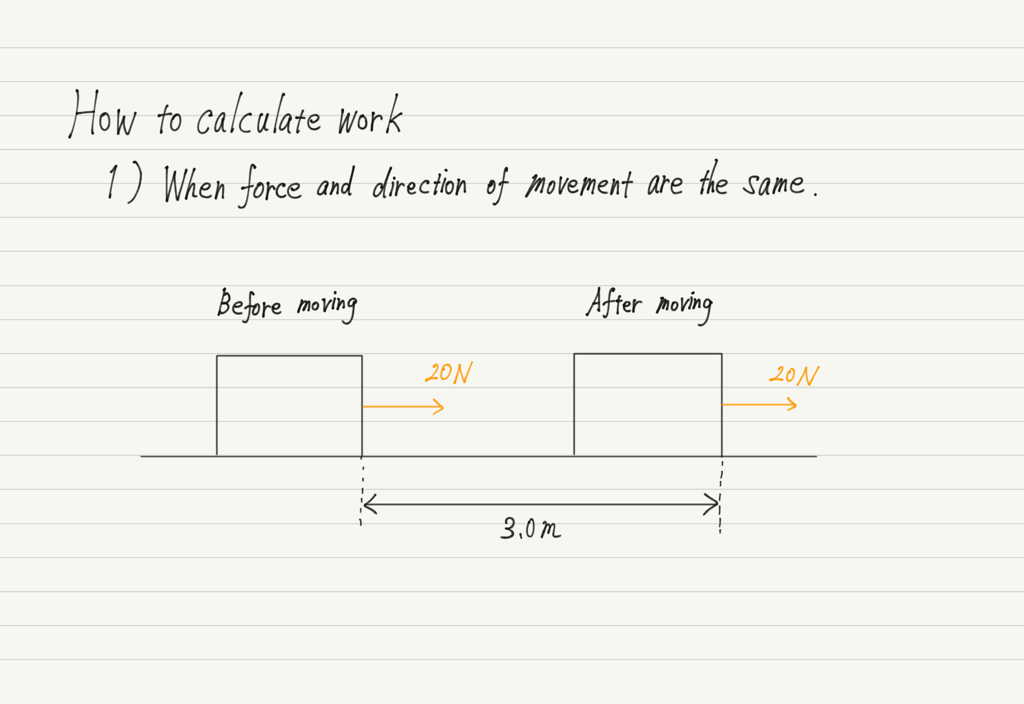 If the object is moving in the right direction in response to a rightward force as shown in the figure above, the work done by this force is calculated as “magnitude of force × distance traveled”. 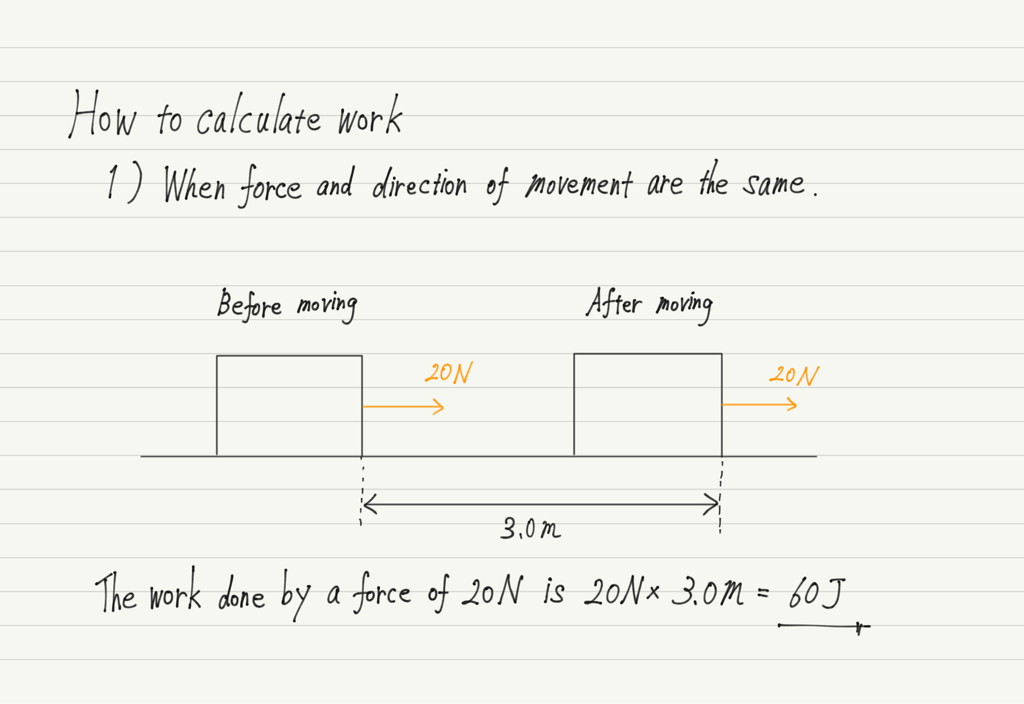 This is the basis of the work calculation. It’s easy!

2) When force and direction of movement are opposite

For example, suppose that in 1) there is friction between the floor. 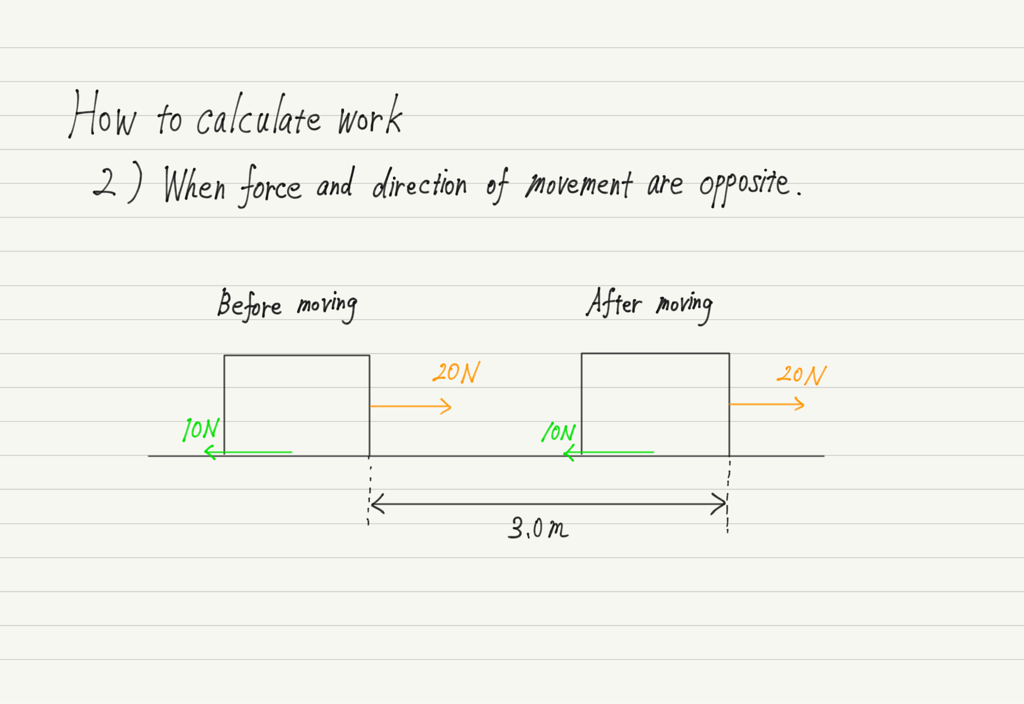 This kinetic friction is not moving the object, but rather hindering its motion, but the work can be calculated.

The formula is still “force × distance traveled”, but in the case of a force in the opposite direction of the object’s movement, add a minus sign to the answer obtained in the calculation. 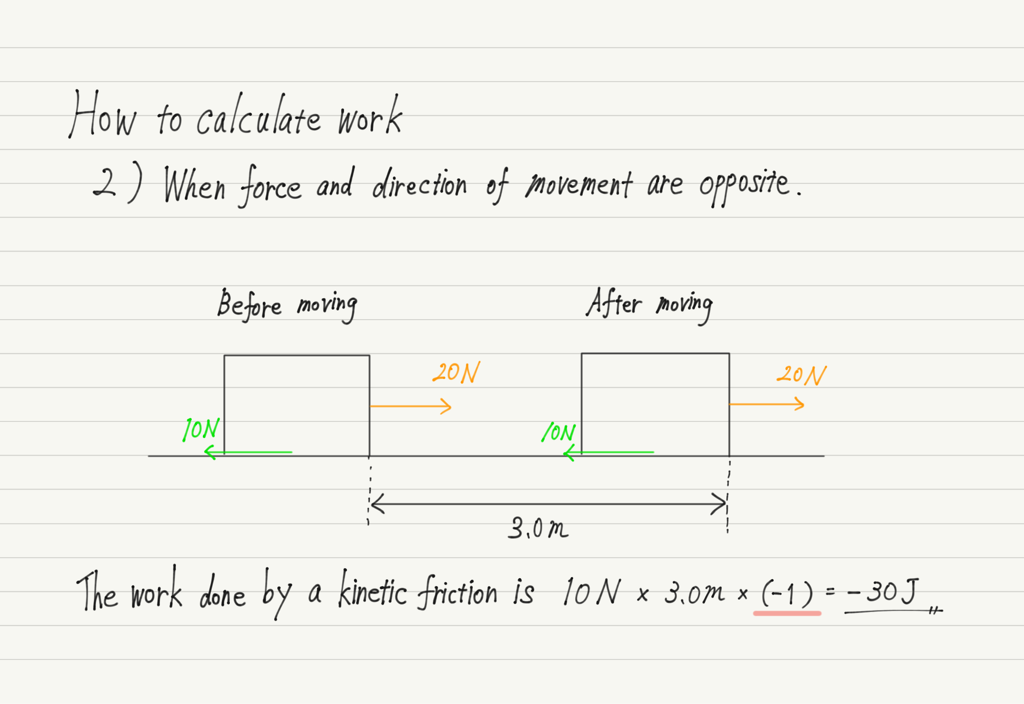 3) When force and direction of movement are perpendicular 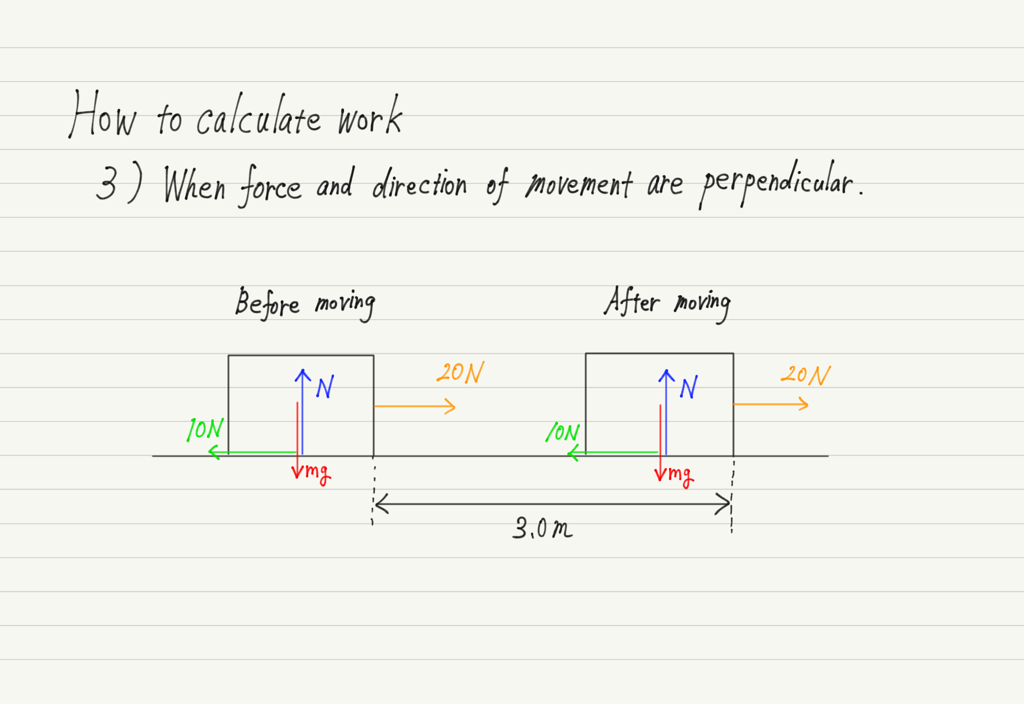 In fact, the work in this case is the easiest to find.
Because the work done by a force perpendicular to the direction of motion is always zero! 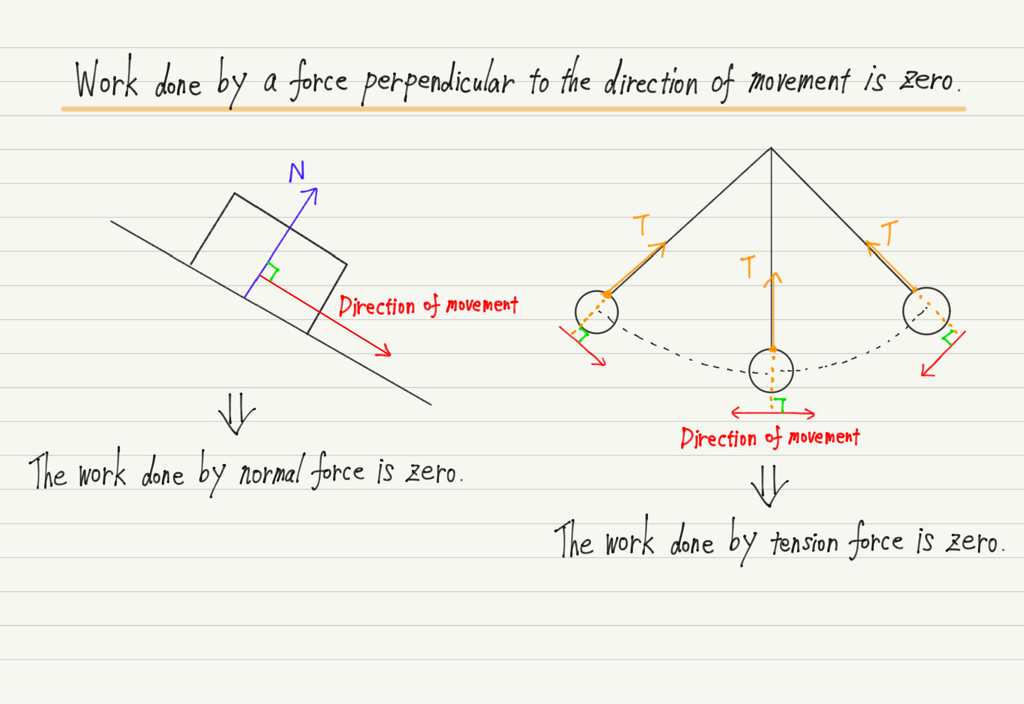 A few notes on work calculations.

In everyday life, we often say “I did my best at work”, but in the physical world, no matter how hard you try, if an object does not move, you have not done work!

Second. The following answer is wrong. Think about what is wrong. 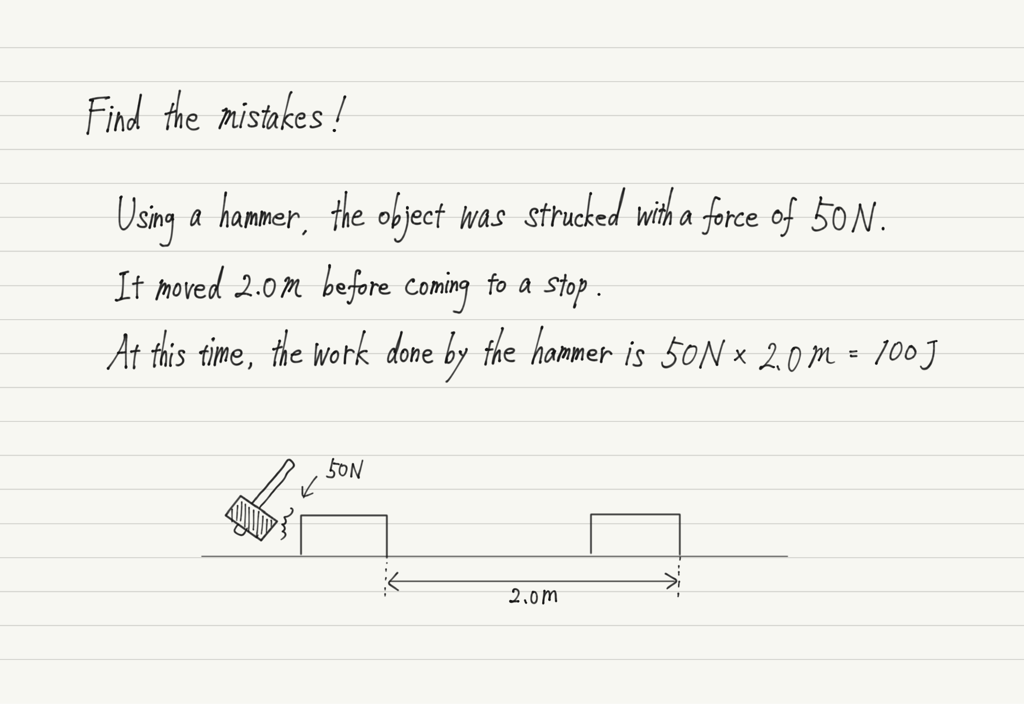 At the beginning of this lecture, we said “work = moving an object by acting a force”.
However, there is one condition for calculating work as “force × distance traveled”.
It is the force that is acted to the object the entire time it is moving.

In the figure above, a force is acted to move the object, but the force is only acted for the first instant.
In such a case, multiplying the force by the distance traveled does not calculate work!

Third. The distinction between vectors and scalars is important in physics, but work is scalars, not vectors!

If you are not familiar with vectors and scalars, read the explanation from the link below.

The fact that the work is scalar means that there is no orientation.
Negative work was found in 2), but this negative does not represent “inverse direction” but “less than zero”.
In other words, it is wrong to interpret the answer to 2) as “30J to the left”!

Because work is explained together with talk of direction of movement and direction of force, many people mistakenly believe that work also has an orientation. Be careful! 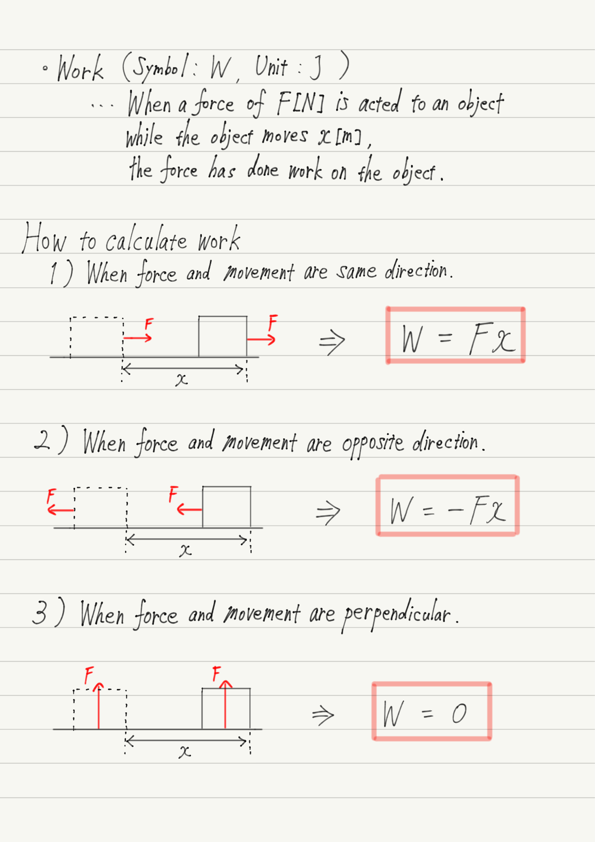 In the next lecture, we will consider the benefits of working with tools.