Starting with this lecture, let’s learn about Newton’s three laws of motion!

The three laws of motion

The three laws of motion are
First law：Law of inertia
Second Law：Law of motion
Third law：Law of action and reaction
, and these are essential in studying the motion of an object!

We will look at these important laws one by one.
In this article, we will focus on the first law.

The Newton’s first law of motion is also known as the “Law of inertia”.

The assertion of the law of inertia can be briefly stated as, “When no force acts on an object, the object’s state of motion does not change.”

It is meaningless to memorize this law. Be able to explain the specifics of the law in your own words.
To do so, it is important to understand the conditions under which the law is valid and to be able to give specific examples of where the law applies.

Deciphering the law of inertia

As for the first part: “no force acts an object,” this means precisely that the composed force is zero.
For example, consider an object being pulled from both sides by a force of 5 N each.
In this case, the forces cancel each other out, so it is as if no force is acted from the beginning.
The law of inertia also holds in this case.

When reading textbooks, pay attention to these casual terms.
“State of motion” means whether an object is stationary or moving.

By the way, it is obvious that “a stationary object remains stationary unless a force acts on it.”
Therefore, the law of inertia requires us to pay attention to the one that says, “When no force acted, a moving object remains moving”!

This is exactly what mankind has misunderstood for a long time.
People in the past assumed that “when a force does not work, the object will eventually stop.
No, not only the people of the past! Are there any of you reading this now who also think so?

But you already know that frictional forces and air resistance are what make objects and balls stop on the floor.

The law of inertia asserts that if there is no frictional force or air resistance, a moving object will continue to move without stopping.

This sounds like a line I’ve heard somewhere before…?

In other words, the exact expression of the law of inertia is: “When no force acts on an object, or if it does act, it is equilibrated, a stationary object remains stationary and an object in motion has a uniform linear motion.”

Note that the converse of this law also holds true.
That is, “When an object is at stationary or in uniform linear motion, no force is acting on it.” is also correct.

Examples of the law of inertia

Let me also give you a concrete example of the law of inertia.

The most obvious example of a “moving object remains moving” is, again, the well-known case of a train suddenly stopping, causing passengers to lose their balance in the direction of travel. 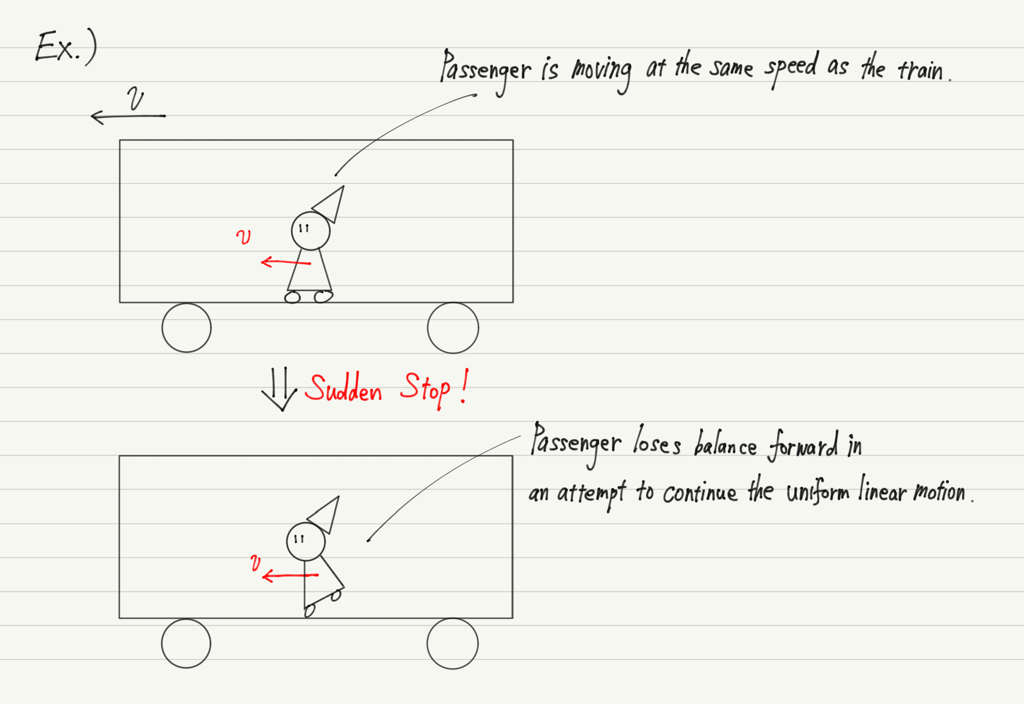 Let’s find some more examples of this! 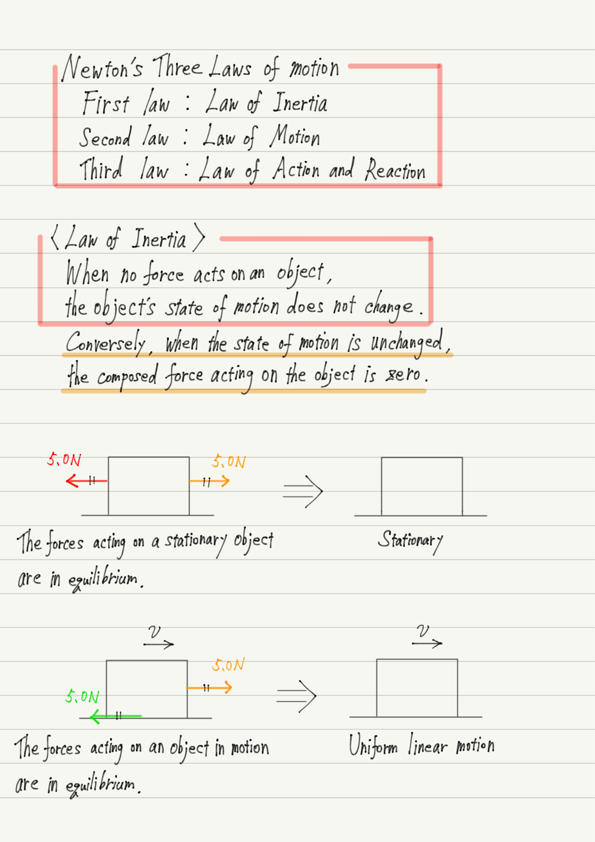 We will skip the second law and look at the third law in the next lecture.