In previous lectures on reading graphs of waves, the main focus was on reading numerical values such as amplitude and wavelength.

This time, instead of numerical values, let us read the motion of the medium. 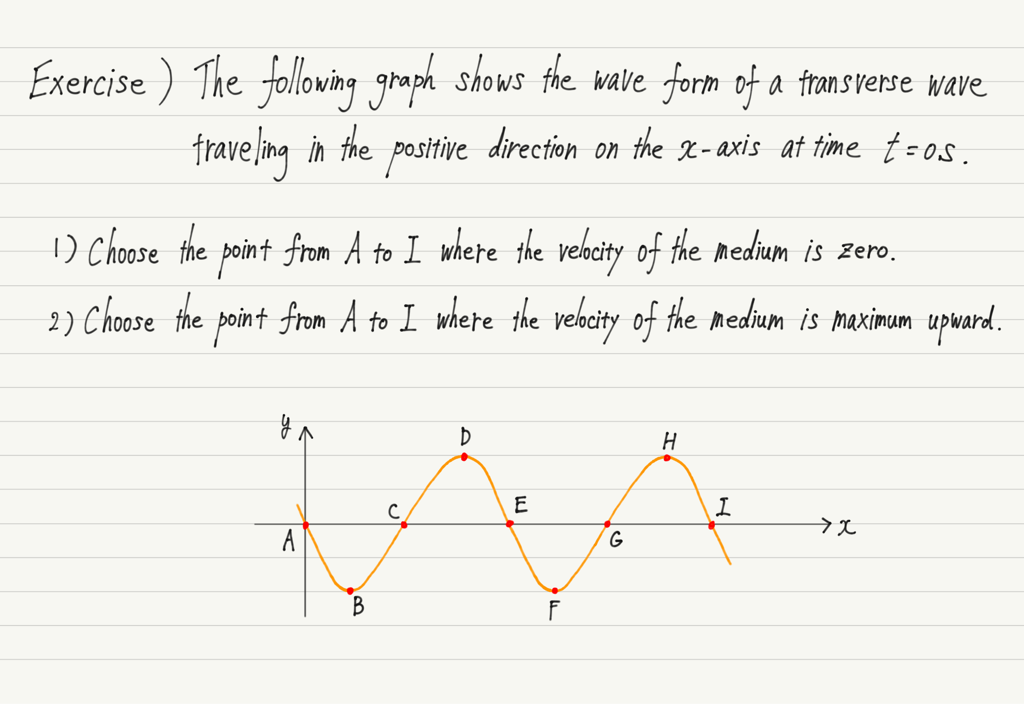 This question does not ask for numerical values, so it is difficult to know what to pay attention to in the graph.
Let’s get right to the explanation!

First, to those who misunderstand the question without reading it carefully.
It is the “medium’s” velocity that is being questioned in this exercise, not the speed at which the wave is traveling!

Waves move at constant velocity (unless the medium changes), so there is no place where the velocity is zero.

The usual example of a wave traveling down a rope is a good one, but the wave machine is probably the easiest way to understand the motion of the medium. 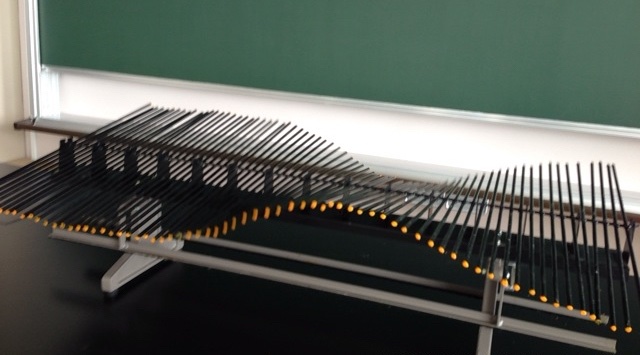 If you have seen it in school, remember the movement.
If you’ve never seen it before, you can watch it on YouTube.

When you look at a wave machine, you tend to look at the whole movement, but please be patient and follow only the movement of one bar.

Then you will notice that the bars are only going up and down and back and forth.
Once you realize this, you have already solved the question.

The point in the reciprocating motion where the velocity goes to zero is fixed at the top and the bottom! 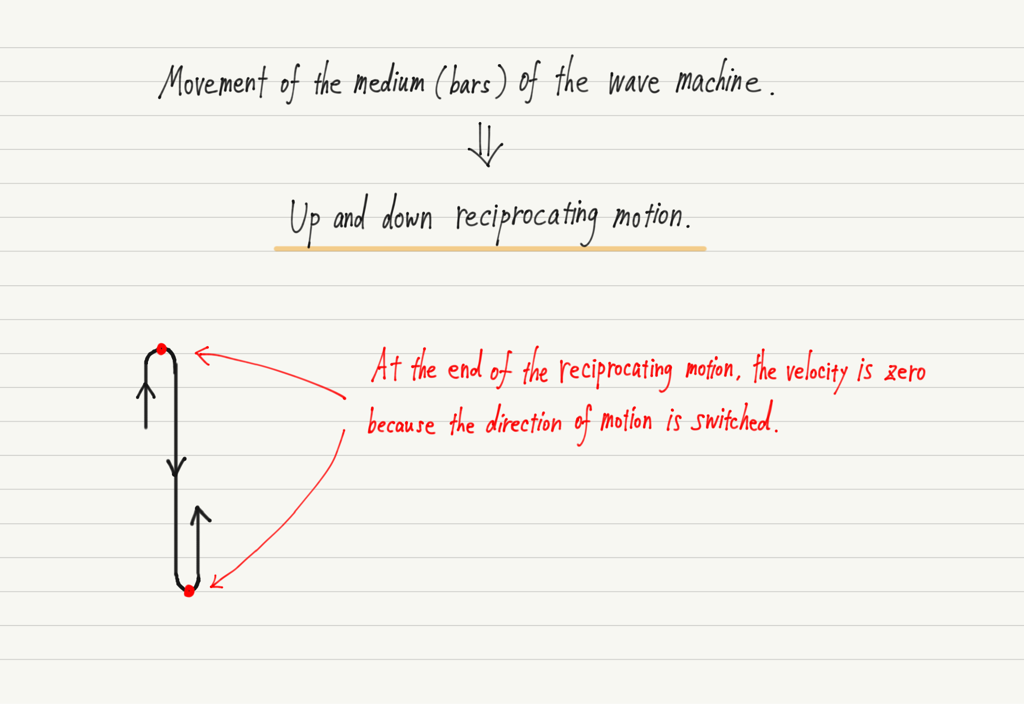 Direction in which the medium moves

Next 2). Now we look for the location where the upward velocity is maximum.
We have just seen that the medium’s velocity is zero at the top and bottom.

If it slows down going up and down, where is it moving the fastest?

That is, of course, right in the middle!

Therefore, the points of maximum velocity are the intersections with the x-axis, A, C, E, G, and I.

We are not done yet.
Since the question is “the point where the upward velocity is maximum,” we must also consider the direction.

The direction of the wave is also read from the graph, but since the y-x graph is a graph of a moving wave stopped in time (i.e., a “picture” of the wave), there is no way to tell how the medium is moving just from this graph.

The solution is to “take a picture of the next moment and compare!”

Since a photograph is a metaphor, we are specifically writing a y-x graph for the next instant.
Since the statement in question gives the direction in which the wave is traveling, let’s shift the wave a little in this direction! 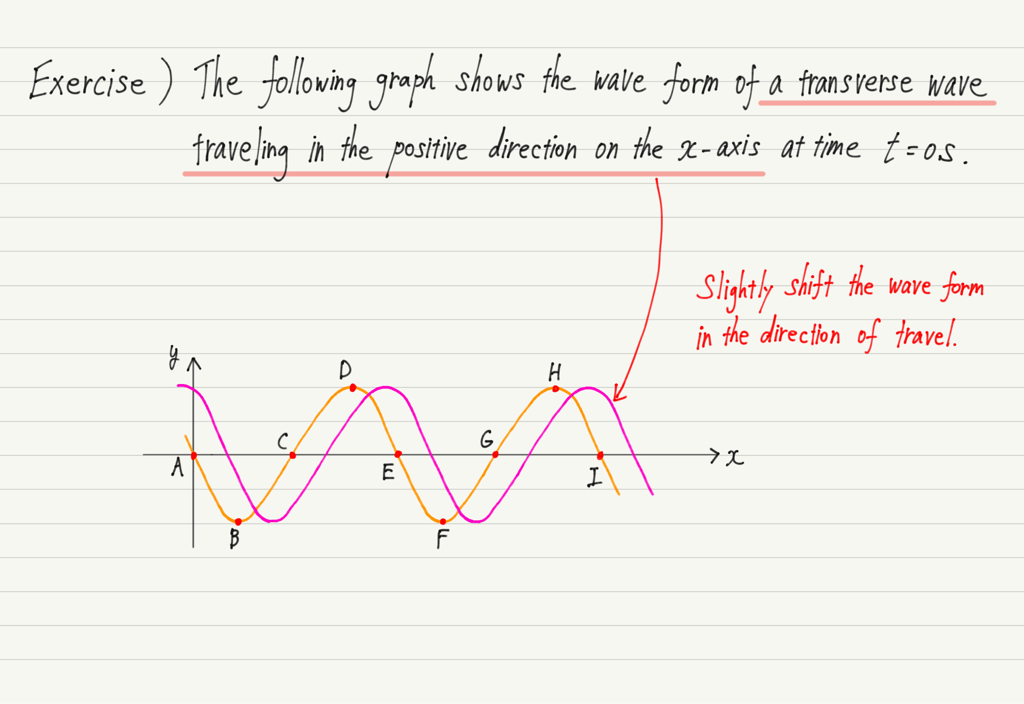 The shifted graph is the waveform at the instant following the time of the first graph.

Now, think of this graph as representing the waves of a wave machine.
The original waveform moves, resulting in a shifted waveform.
What will be the movement of the bars at A, C, E, G, and I ?

Remember that the bars of the wave machine can only move up and down. 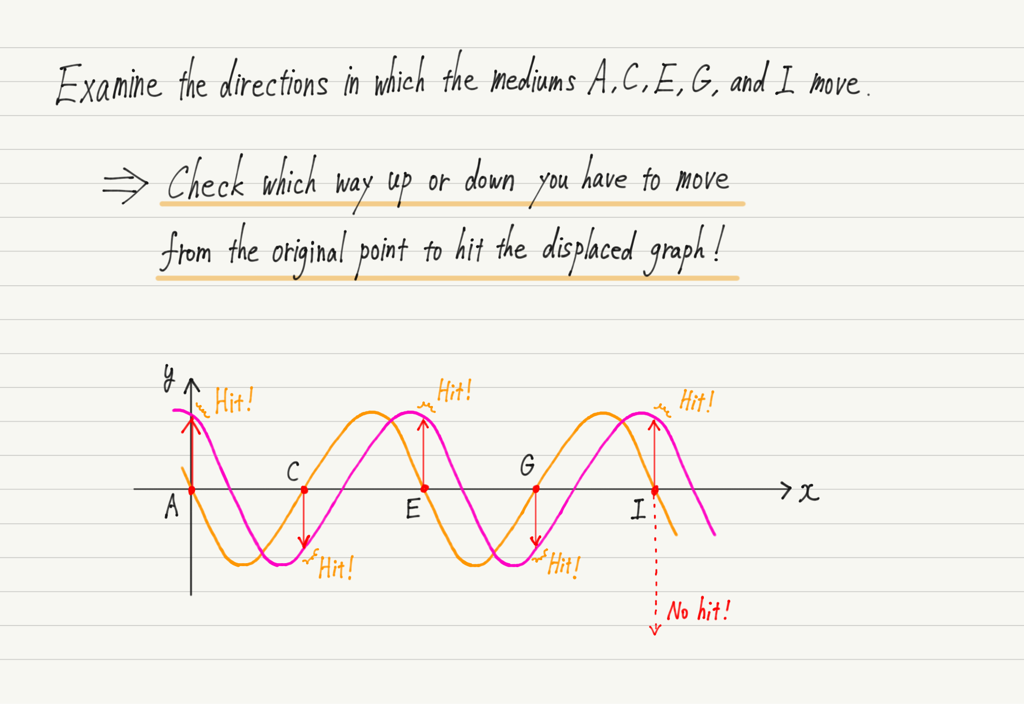 Now you know whether each bar moved up or down!

Some wave questions, such as this one, cannot be solved without a firm understanding of the motion of the medium.
Always be able to picture in your mind the specific movements of the medium, be it a rope, a wave machine, or whatever!