Just when you think the train you are on has started to move, it is the train on the opposite platform that has moved!
Have you ever had such an experience?

And then the train starts running.
We recognize that “the train is running” when we see the scenery changing outside the window, but I feel that “the scenery is moving” is more accurate if we say it as we see it.
In this lecture, I would like to talk about such “viewpoint”.

When we see the landscape moving, we recognize that we are moving because we all know that the ground does not move.

So no one claims, “I am standing still and it is the ground that is moving!”

When we think about an object in motion, we naturally try to see things in terms of a stationary place (i.e., the ground).

When considering any motion, the ground is the reference point anyway.
This viewpoint is called “absolute”.

On the other hand, if we interpret “the scenery outside is moving” as we see it, this is a relative viewpoint.

Some people may not feel comfortable with the relative viewpoint.
They might say, “It was the train that accelerated and departed, not the scenery!”
Of course it is. But what I want to say here is that we should accept such a viewpoint as a way of interpretation.

Now, there is nothing wrong with viewing an object in motion from the viewpoint of a stationary observer.
It is when the observer is also in motion that the relative viewpoint comes into its own.

How to calculate relative velocity

Suppose you are in a 40 km/h car and a 60 km/h car is driving in front of you.
The other car is faster than you, so the gap is widening.
But from your viewpoint, how fast does the other car appear to be moving away from you?

If your velocity is +40 km/h, the velocity of the other car running in the opposite direction is -60 km/h.
Substituting this velocity into the previous formula, the relative velocity becomes

Since it has a minus sign, we can interpret it as “100 km/h in the opposite direction of the direction you are going”.

When investigating the motion of an object, calculations tend to be complicated from an absolute viewpoint when there are multiple objects in motion.
In such cases, it is often easier to put an observer on one of the moving objects and consider the relative velocity from the observer’s viewpoint. 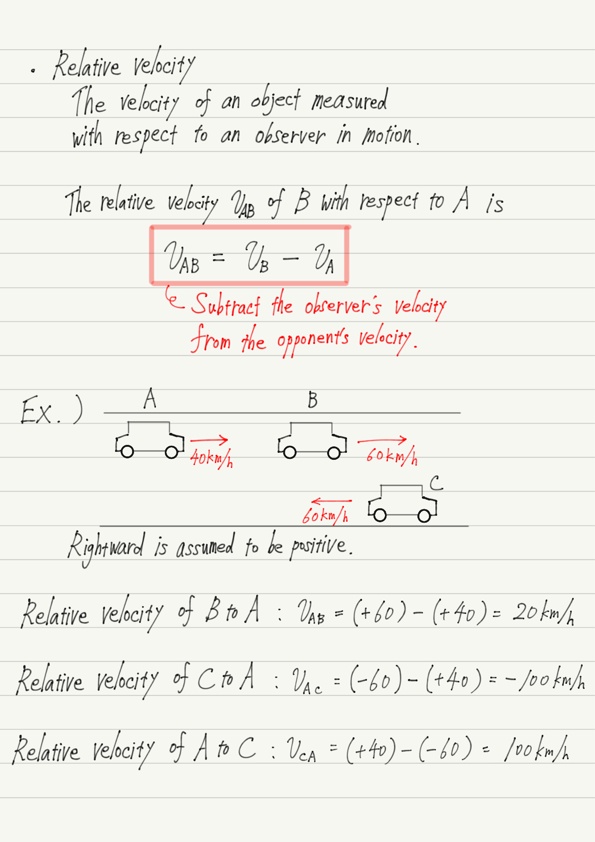 If you are on earth, the ground can be an immovable reference, but not from space.
The ground is nothing special.

By the way, there is something more famous in physics when it comes to “relative” than relative velocity, isn’t there?

Yes, Einstein’s Theory of Relativity!
Theory of Relativity is far beyond high school physics, but what I want to say is actually the same as relative velocity:
There is no special place in this universe, and physical phenomena are the same from everyone’s viewpoint.